I spent so long trying to come up with a book/author for D that here we are on F...

So if you have a book you think I ought to read that is tangentially related to the letter D, let me know in the comments. 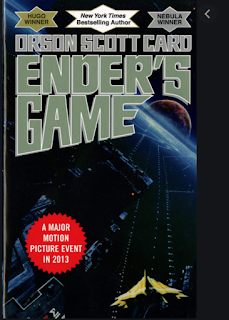 Letter E is one of my more controversial books, and I don't know if I have time to do it justice right now. It is Ender's Game--a book that is woven through the tapestry of my life, until it met up with Harry Potter, and they wound their way together. And now, both Orson Scott Card and JK Rowling are in the news for saying things that have been called hateful.

I've avoided reading what they've said, exactly. It's strange, because I grew up as an incredibly sheltered child of the 80s, and Orson Scott Card was the first writer who ever brought LBGQ people out of the shadows and into the light for me. I'm so sorry if he's said anything that has hurt you. It is also true that when I look back at my growth as a person, he is one of those signposts way back in the beginning that showed me how to be an ally. JK Rowling too.

This is not meant to be a defense of either author. It is just meant to explain that I have not given up on them yet. Here's my quote from Ender's Game:

“I think it's impossible to really understand somebody, what they want, what they believe, and not love them the way they love themselves.”

"Remember, the enemies' gate is down."