C is for City of Bones by Cassandra Clare 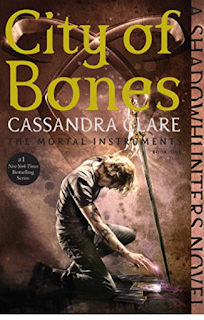 I had SUCH a hard time finding a book for B, but dozens of choices for C. I'm not sure if City of Bones won out because of the alliteration of City and Cassandra Clare, or if it really is the best of the pack.

I could just sit and quote for hours at a time? For me Ghostbusters is that movie, Psych is that TV show and City of Bones is that book.

I could just make this blog post ridiculously long and quote them all, but I'm afraid at some point copyright would come into play...so here are my top 10 favorite quotes:

1.“Clary grinned. "A picnic? It's a little late for Central Park, don't you think? It's full of-"

He waved a hand. "Faeries. I know.""I was going to say muggers," said Clary. "Though I pity the mugger who goes after you.""That is a wise attitude, and I commend you for it," said Jace, looking gratified.”

2. “It means 'Shadowhunters: Looking Better in Black Than the Widows of our Enemies Since 1234'.”

3. “Can I help you with something?"Clary turned instant traitor against her gender. "Those girls on the other side of the car are staring at you."Jace assumed an air of mellow gratification. "Of course they are," he said, "I am stunningly attractive.”

4. “It wouldn't be my move," Jace agreed. "First the candy and flowers, then the apology letters, then the ravenous demon hordes. In that order.”

5.  “Magnus, standing by the door, snapped his fingers impatiently. "Move it along, teenagers. The only person who gets to canoodle in my bedroom is my magnificent self.""Canoodle?" repeated Clary, never having heard the word before."Magnificent?" repeated Jace, who was just being nasty. Magnus growled. The growl sounded like "Get out.”

6. “I have a high pain threshold. In fact, it's more of a large and tastefully decorated foyer than a threshold. But I do get easily bored.”

7. "Oh, it's big enough," he said patronizingly, "but somehow I was expecting something… you know." He gestured with his hands, indicating something roughly the size of a house cat."It's the Mortal Cup, Jace, not the Mortal Toilet Bowl," said Isabelle.”

8. “Sorry, are you telling me that your demon-slaying buddies need to be driven to their next assignment with the forces of darkness by my mom?”

9. “It's a coffee cup."She could hear the irritation in her own voice. "I know it's a coffee cup.""I can't wait till you draw something really complicated, like the Brooklyn Bridge or a lobster. You'll probably send me a singing telegram.”

10. “This is bad," said Jace."You said that before.""It seemed worth repeating.”

I could have done that all day... Enjoy!