O is for Organization 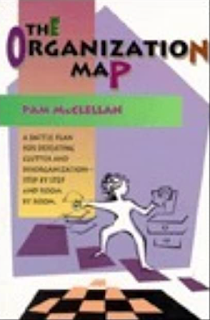 I am a person who loves the idea of organization, and I try, I really, really do, but then there's an A-Z Challenge in April, or something equally important, and things get out of hand.

When we first got married, I checked a book out of the library called The Organization Map, and with its help I got SO organized. I could have made a How To video, our apartment was so organized. It never occurred to me that a one-room apartment with hardly any stuff would barely qualify as rung 1 on the Ladder of Difficult Spaces to Organize. A couple of years later we bought a house, and then we had two kids, and then we sold our house and moved across the country, and bought a bigger house...and suddenly I NEEDED that book back.

I'm old, so this was in the early days of the internet, and the book was out of print, so it wasn't that simple. I tried other books, but they just didn't speak to me the way The Organization Map did, so I tried to implement the things I remembered. One day, to my delight, amazon started a used book selling service. I IMMEDIATELY bought The Organization Map.

I was outside playing with my kiddos when the mailman came by, and I ripped open the package and sat on my back porch steps reading it while my kids ran around. The copy was in fantastic shape. It could have been brand new, and it was just as good as I remembered. By this time I had a third child, and I might have been pregnant with my fourth. A neighbor came by with her two kids, and we talked, and eventually we all ended up back inside.

It rained that night, and the next morning, my husband brought my sopping wet copy of The Organization Map in from where he'd found it on my porch steps. I cooked it in my oven, flipping the pages every so often, and it dried pretty well, though it now looked like a thoroughly used book. It seems like there should be some sort of moral in that, yes? Every time I looked at the book, it reminded me of my organizational failure. And eventually, it also made me smile.