H is for Howl's Moving Castle 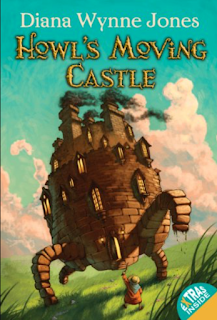 Howl is one of my favorite characters ever created. I don't think I would want to date him or anything...no, I think I would very much enjoy BEING him. I think the thing I love the most about him is the way he notices and admires the immenseness of Sophie's personality way before she knows it about herself. He teases her about it so much she is bound to see it in herself eventually.

1. “I make that four horses and ten men just to get rid of one old woman. What did you do to the King?”

2. “Howl backed into the door to shut it and leaned there in a tragic attitude. "Look at you all!" he said. "Ruin stares me in the face. I slave all day for you. And not one of you, even Calcifer, can spare time to say hello!"

"Is something wrong?" asked Sophie.
"That's better," Howl said. "Some of you are pretending to notice me at last. Yes, something is wrong.”
3. “You are a terror, aren't you? Leave this yard alone. I know just where everything is in it, and I won't be able to find the things I need for my transport spells if you tidy them up.'
So there was probably a bundle of souls or a box of chewed hearts somewhere out here, Sophie thought. She felt really thwarted. ‘Tidying up is what I’m here for!’ she shouted at Howl.
‘Then you must think of a new meaning for your life,’ Howl said.”
4.  “Really, these wizards! You'd think no one had ever had a cold before!

Well, what is it?" she asked, hobbling through the bedroom door onto the filthy carpet.

"I'm dying of boredom," Howl said pathetically. "Or maybe just dying.”
5. “More about Howl? Sophie thought desperately. I have to blacken his name! Her mind was such a blank that for a second it actually seemed to her that Howl had no faults at all. How stupid! 'Well, he's fickle, careless, selfish, and hysterical,' she said. 'Half the time I think he doesn't care what happens to anyone as long as he's alright--but then I find out how awfully kind he's been to someone. Then I think he's kind just when it suits him--only then I find out he undercharges poor people. I don't know, Your Majesty. He's a mess.”