B is for Sheena Boekweg

I met Sheena a long time ago, in the Hatrack community of writers. Such happy memories, and so many friends were made in that online community. One day, Sheena, Sabrina West and I decided to write a book together. It was so much fun. We each created one character--I created Ana, Sheena created Sam, and Sabrina created Juliet. We did some initial world-building, and then one of us...was it me? I feel like it was me, but I don't remember!...wrote chapter one. Then I mailed it (!) to Sabrina, and she wrote chapter 2, and then mailed both my chapter and her chapter to Sheena, who wrote chapter 3 and then mailed chapters 2 and 3 back to me. We wrote the whole book that way, and then had a ridiculous amount of editing to do. For book 2, we moved to google docs, and got tangled in a lot of OPINIONS, but I am super proud of the way both of those books turned out. You can find them on amazon. 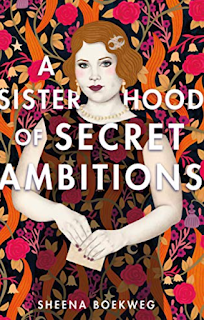 Alchemy is free on kindle, btw.

Oh wow. Prophecy of the Six is too! No wonder we haven't been making much money on them lately...

Sheena went on to become a published writer. She wrote
Glitch Kingdom, a book about a videogame gone awry, and her newest book, A Sisterhood of Secret Ambitions will be released on June 1. I got to be one of the beta readers, and let me tell you, it is amazing! It's the story of a secret society of women who both protect the weak and decide the fate of the United States of America. It's set in an alternate 1920s, and it follows a girl whose job it is to marry the man the secret society has chosen to become president of the United States. It is a sweet feminist marvel.

As for the quotes...I don't have a copy of the book yet, so I will give you the first line from Alchemy, which, as it happens, was written by Sheena (this means I DID NOT write the first chapter. Perhaps I did in the first draft, or perhaps my memory is completely failing me).

Sam's first line in Alchemy: "I always told everyone I wanted to be a mage when I grew up. Which is, apparently, how irony looks when it wears my clothes...I didn't think it would hurt to get infected with magic. I didn't think of the consequences...All I could see was the power. I never saw the fear."