P is for Paul and a long, complicated story 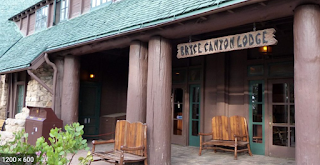 The summer after my freshman year of college, I worked at the gift shop in the lodge at Bryce Canyon National Park. It's about as remote a spot as you could get, and you get to work with a lot of interesting people.

The story I'm about to tell requires some backstory that doesn't place teenage me in the best light, but it's still a story worth telling. Names and identifying characteristics of most of the people involved have been changed.

The very day I moved to Bryce Canyon, I got myself mixed up with a manipulative man who we will call Scott. He was quite a bit older than me and was above me in the power structure. He was not only dating me, he was also dating another girl as well, and he managed to string us both along for most of the summer.  The memories are hazy, but he'd gone to some meetings for a couple of days, and I think he'd taken the other girl with him. One of his friends, Charlie, asked me out on a date, and I was both hurt and anxious to not seem hurt, so I said yes. There weren't a lot of places to go on a date at Bryce Canyon, so we were going to the Lodge's restaurant, where we would be seen by nearly everyone we knew. Kara and another guy were going to double with us.

Then Scott came back, and explained in his silver-tongued way how he'd been railroaded to take that other girl with him, that he had used that opportunity to finally break up with her for once and for all. He understood why I'd said yes to a date with Charlie, but could we meet up afterwards to talk? He needed a chance to convince me that we could really be together.

All of that is simply backstory for the story I actually want to tell. The order of events is a little wonky in my head, and I know that Kara probably remembers it better than I do, so maybe someday I will ask her to clarify. Let's go back in time a few days--

Paul was a latecomer to the Bryce Canyon staff. He was in his 20s, and he wormed his way into the hearts of nearly everyone. And he liked me. There are a lot of retired people who spend their summers working in the national parks, and I worked with a lot of them at the gift shop. They adored him, and hated Scott. Paul was good with cars, and he helped them with their automotive needs. According to them, he wanted to ask me out, but he was afraid. Finally, my coworkers set us up on a date. He took me to Ruby's Inn, which was about 45 minutes away. He offered to help me buy a car, and talked about cars for a lot of the car ride. We wandered around the outdoor market for a while and then drove home. I wasn't interested in him, but he didn't seem to be overly interested in me either, no matter what my coworkers said. It felt very much like hanging out with a casual acquaintance, not like a date.  It was nice, but I didn't think anything else of it.

That had been a few days before my date with Charlie... He picked me up, we went to dinner. As we sat there in the restaurant, Scott walked in, came to the table, and sat down with us. At first he appeared very friendly, but slowly I realized that his good humor was a front for something more vicious. He started telling everyone at the table how popular I was, and he even asked our waiter (remember that this was a very small community, and I would definitely be seeing this person again soon) if he'd met me yet, and had he had the opportunity to date me yet, because there was a waiting list... Scott asked Charlie if he was aware that I had another date scheduled immediately after my date with him... and then he told his captive audience a story about how Scott and Charlie were at Charlie's apartment right before this date. There was a knock on the door, and when they opened it, Paul was standing there, asking if they had any Super Glue, because he had gone back to Ruby's Inn to buy some of the rocks I had liked there, and he was trying to turn them into a present for me.

My face feels hot just thinking about that evening, and I have 22 years of separation from it. I had no coping skills for an event like that, so I just sat there, pretending I thought it was all funny and wishing the earth would swallow me up.

Fast forward a few days...I arrived at the lodge, and Paul was sitting on the steps surrounded by a small bunch of people. He was coughing hard, and explained to me that he'd opened up a bottle of bleach, but it had been mixed with something else and when he opened it the fumes had burnt his lungs. An ambulance came and got him...

and that was the last time I ever saw Paul. He vanished, taking with him money from half a dozen retired people--money they'd lent him, money he'd taken so he could fix up their cars, money to buy them a car, money for our date... It seemed like everywhere I turned there was someone who had given him a significant wad of cash. I, with the rocks he bought me, was the only one who had gotten anything from him. After a while, it came out that he was MARRIED, and his wife had been living in the nearest town and that they were both wanted in several states.

This story really does make me laugh more often than it makes me unhappy, but it had some long lasting consequences for my psyche, as you might imagine.  But when I think about the fact that I drove through some of the loneliest places in the United States with that stranger, I count myself incredibly blessed that he was just a grifter. Be careful.