L is for Loyalty

I'm switching it up...I might be a writer, but I'm a terrible storyteller when it comes to true stories. One of my goals this year is to try to learn to tell stories from my life, so the rest of the A-Z challenge will do just that. 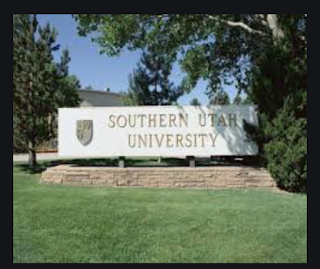 When I was in college, I was a deep-in-the-dark closet commitment-phobe. I was so deep in the dark that I didn't know it about myself until years later. As a result I tended to like men who were also commitment-shy. Before the time of this story, loyalty was pretty scarce on the ground. Even at the time this story begins, I was only kinda-sorta dating, while simultaneously never going on a date with, a guy who had a girl back home. Chad is a good guy, and this girl and I both knew about each other. It was as close to a real relationship as I knew how to get. I was a sophomore at Southern Utah University, and I lived on-campus at Manzanita Hall, top floor on the farthest building to the right. I'd met Chad playing pool at the student center. He lived at .... oh geez, I just had it a minute ago... anyway, my dorms had kitchens, but he lived at the other place, the one
where you eat on campus... and his Hall had a hot tub. One evening I was in the hot tub with Chad and several of his friends. I was the only girl in the hot tub, so of course a lot of people were paying attention to me, because I was the best looking girl in the hot tub.
I'm a Lydia Bennett sort of girl, so I was having a good time. At the other end of the hot tub was a good-looking guy I'd never seen before, talking with his friends. He kept looking over at me approvingly, and it was pleasantly flustering. If you are wondering how to get men interested in you, here's the trick: I don't know how to get the first one interested, but once you've got one, it's like a snowball rolling downhill, and pretty soon you've got more than you know what to do with. (at least 1990s men, perhaps men today are different).

We made small talk, and it was strange, having Chad there, definitely acting boyfriend-like, but apparently not enough that anyone but me noticed, and to have this other guy's group merge in with our group for the sole purpose of flirting with me, and yet I was the only one who noticed.

After I'd gotten out of the hot tub and geez, I don't remember for sure, but I'd like to think that I'd gotten some sort of covering on, I remember one of Chad's friends sweeping me off my feet like the finale of a dance number. Cameras may have been involved. That stands out in my memory, because this guy was large, and had never acted like that before, and because this other guy was still looking on approvingly.

That night, I was sitting at the kitchen table telling this story to my roommates when the phone rang. It was hot tub guy, and he'd been interested enough to find out my name (we hadn't exchanged names) and my phone number. He asked me out on a date!

His name was Joe, and if I remember correctly, one of my roommates had once been interested in him, and he was not just good-looking, he was also extremely nice. Toward the end of the night we ended up on campus. I rode piggyback on his back and laughed as he ran down a grassy hill through some trees to a fountain...(this fountain seems to only exist in this one memory, which leads me to wonder if I've somehow made it up, but oh well, that's how the memory goes). Eventually we tumbled to the ground and rolled, until he could look down at me. He stopped laughing, and moved his face toward mine...

and I turned away, and persisted in turning away long enough to tell him I liked Chad, and even though we weren't exclusive, it felt like maybe we should be. And he stood up, brushed off his clothes, and marched me back home. I tried to say that maybe if we got to know each other better I would feel differently, but nope. That was the end. It had seemed too good to be true because it was.

I was no stranger to people who were only interested in short term romance, but I'd finally met the Wickham to my Lydia, and it hurt, because it was staged to seem so perfect. I don't regret it though. It was my first foray into Loyalty; my first step toward being an adult that could sustain a forever marriage. I still had a long way to go, but I was on my way.