M is for Mike and Jason and Dave 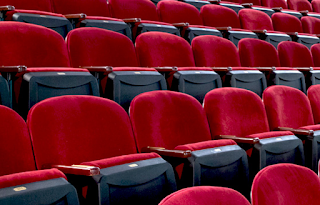 Those three names go together in that order, with that number of ands between them. Any other combo would not mean the same people. (Actually, I decided to change the names, because I don't really know the etiquette for telling internet stories. But the initials are the same, so you get the idea...)

Theater Design was held in the auditorium, and our purpose was to design the sets for the plays the drama department put on. The curriculum was sporadic at best. The class was filled with a group of people who actually enjoyed set building and it was also filled with a bunch of basketball and baseball players. And Kara and me.

Mike and Jason and Dave were baseball players, and they hadn't earned their name placement yet. At this point they were still just part of the larger group. We spent most of our time in the front of the back section of theater seats. Occasionally we were given jobs painting and drilling things on the stage, but that was just a distraction from the more important work of chatting.

Kara was a huge believer in keeping busy, so she and I spent out of school time either walking or attending all these boys' games. When colleges were picked, Kara, Mike and Jason and Dave all picked a tiny little school I'd never heard of called Snow College. My dream of attending BYU suddenly seemed like a lonely one, so I followed them.

Mike and Jason were in line to be valedictorians of our high school, at least until an A- in theater design crushed that dream. I was indignant on Mike's behalf (he was ahead of Jason GPA wise), but he didn't seem too bothered.

I don't have a lot of fully formed memories of high school (except for the day my science teacher forgot to throw away the dissected frogs over a five day weekend. That next day is seared into my memory), but I remember so many things about Theater Design--Caleb hitting a golf ball that was being used as a prop up into the lights; Jason singing Penny Lane while he and I straightened the large dressing room; me awkwardly trying to join in a discussion of football that I didn't belong in; some guy whose name I don't recall at the moment hitting another girl with a 2x4 when she wanted to join our group and thought the best way to do it was to pretend to hit Kara with a 2x4; having to decide if I was going to go along with the crowd at ignoring that girl for the rest of the year... fun times.

But there was one life-changing moment that happened to me in Theater Design. I was a pretty classic underachiever, and we were all sitting around, talking about our ACT scores, and I had done really well. My math score was significantly lower than my other scores, and I hadn't realized that it was still a decent score, until rather late in the conversation. The way I remember it, Jason turned to me and said, "You make me so mad." Honestly, I was stunned that I was important enough in his life to even cause an emotion, so I thought he was kidding at first. But he meant it. He said, "I work so hard to get good grades. You're so smart and you could do so many things, and you are just wasting it. You're better than this, Melanie. Do something with your brain." I believe Mike might have joined into the conversation and agreed with Jason, but it's honestly a bit of a blur after that. It took a while before that conversation bore fruit, but it did.

Perhaps these three will turn up in later stories, because it wasn't the last time Jason said things that changed the course of my life. You'll have to come back to find out.