An important or self-important person; a pompous self-important official or person of rank;
[After the Grand Panjandrum, a character in a nonsense farrago written by Samuel Foote (1720-1777).]

For the Letter O, my good friend Susan wrote a post about out of print books that reminded me of a story my children discovered in one of their grandmother's books a few years ago. It tickled their funny bones so much that they memorized it and would just start spouting it at random. This would usually make them laugh so hard that they couldn't catch their breath, or speak, except to gasp out, "a cabbage-leaf! (much mirth) To bake (gasp, gasp)...an apple pie!" "WHAT?!? No soap!!?" I have such happy memories of this poem that I decided to share it with you. You'll just have to imagine my children though. WHY didn't I take a video? I guess I thought those days would last forever.

The story was published in 1755 to test the memory of the actor Charles Macklin, who claimed he could read any paragraph once through and then recite it verbatim. It was published as part of an 1820 novel titled Harry and Lucy concluded (vol. 2) by Maria Edgeworth, and again as a poem in a picture book by Randolph Caldecott in 1885, with a few minor changes in wording ("grand Panjandrum" changed to "great Panjandrum" and she went down the street, instead of up the street.) My children memorized the 1885 version: 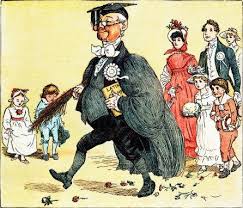 So she went into the gardento cut a cabbage-leafto make an apple-pie;and at the same timea great she-bear, coming down the street,pops its head into the shop.What! no soap?     So he died,and she very imprudently married the Barber:and there were presentthe Picninnies,     and the Joblillies,          and the Garyulies,and the great Panjandrum himself,with the little round button at top;and they all fell to playing the game of catch-as-catch-can,till the gunpowder ran out at the heels of their boots