What's Up Wednesday: A Snow Day! 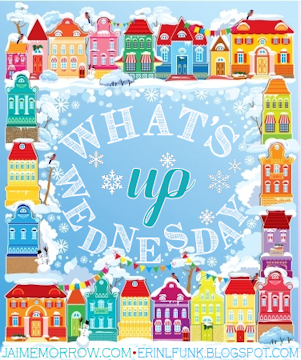 What's up Wednesday is a blog hop created by Jaime Morrow and Erin Funk to help writers keep in touch with each other. If you'd like to participate, sign up on the linky at one of their blogs, and use one of the cute WUW buttons provided. Thanks!

I love that cute "What's Up Wednesday" picture. It's adorable.

Copyediting! If you ever decide to go on a collaborating adventure, I recommend that your partner be someone with mad copyediting skills, like Sabrina (but you can't have her--she's taken).

If you are interested in helping with the cover release, book release or in reviewing an ARC, please email me at thecrousefamily @ yahoo . com  (But without the spaces, of course). There is a raffle for all blog hosts and reviewers, with an amazon gift card as the prize.

Writing Goal: Next week is the cover reveal!!! My goal this week is to get that all worked out so it runs smoothly.

This week I attempted to read a book called Elizabeth Is Missing. It's a mystery story where the POV character is an elderly woman with dementia. It was very well written--so well written in fact that I had to stop reading it. I was disoriented for at least an hour every time I set the book down. I'm one of those people who can get very caught up in the emotions of a book anyway, and when those emotions are accompanied with dementia...it was kind of awful. I have Blue Lily, Lily Blue AND Mortal Heart waiting for me at the library...if only I could get there!

WHAT WORKS FOR ME

Our copyediting has three main phases--this first part, where Sabrina goes through and fixes every little mistake and we clean up behind her; the second part, where our copyeditor, April, finds even more stuff to fix, and then the third part, where we each get our own hard copy of the book and find even more things to fix. It's ridiculous that it takes so long, and that there is so much to find, when we've been editing it for ages, and when we've had so many beta readers (including Connie, who spent a tremendous amount of time copyediting). But that's what it takes.

WHAT ELSE IS NEW

It's a snow day today, so all the kids are home, and we've all been pretty lazy. The boys did A LOT of shoveling, so they would like to be exempted from the lazy list. My lovely friend and neighbor always has a video party in the afternoons on snow days, so the boys are headed there, while the girls still have some shoveling to do. Poor girls...
at December 03, 2014