What's Up Wednesday--In Which I OUTLINE A BOOK!!! 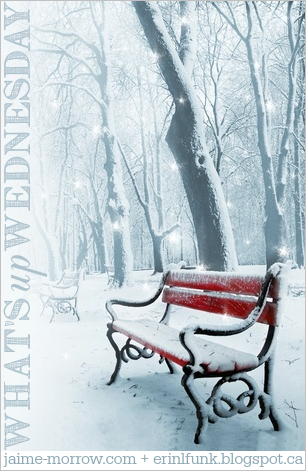 What's Up Wednesday is a blog hop created by Jaime Morrow and Erin Funk as a way for writers to connect with other writers. You can join by using the link on their website.

What I've Been Reading

I read Requiem for a Gypsy, a murder mystery set mainly in Slovakia, with several forays into the rest of Europe. I chose to read it because helpful books and websites about the modern day Roma are few and far between. I enjoyed the book. From a purely research standpoint, it was the most helpful thing I've read, but it still wasn't very helpful. Though the Roma were in it, the titled gypsy was a metaphorical gypsy, not a real one. I'm thinking about rereading Vodnik, a wonderful fantasy set in Slovakia. I should have done that from the start, but who knew I'd have such a rough time finding information?
What I've Been Writing

I outlined yesterday!!!!!!!! I was at the dentist, waiting for my kids, and finally I ran out of excuses. Now I know why I've been dragging my feet so much--this is a complicated story I'm trying to write. One of the character's stories happens out of sync with the other characters, so I think I'm going to have to tell it by flashbacks. In fact, late last night I decided it might simplify everything if his whole story is a mystery the other characters need to solve. Also, there are a boatload of POV characters. I can't say much more at this point, except to say that...I'm writing the sequel to Hidden Magic! It's finally happening!
What Works For Me

When I'm researching a setting, I find that reading fiction gives me a much better sense of place than nonfiction does. Nonfiction doesn't supply me with the details, or the sensory images I need to place myself somewhere I've never been (I've never made such a huge leap as trying to write a story in Slovakia. I'm really terrified, and wish I could afford to go there and do some research. But I'm not, so fiction is the next best thing.)

What Else Is New

On Monday, I finally had three hours to myself. It has been months and months, and I was in dire need of some ME time. I'd thought I would get it over a week ago, but then there were snow days and sick days and teacher work days, and my kids stayed home so much they very nearly forgot they went to school at all. On Monday I had a list of things to do as long as my arm, but I ignored it. Instead I lay on the couch and watched three and a half episodes of Gilmore Girls. I can't believe what a huge difference that has made in my mental health. I even had the headspace to OUTLINE yesterday! I'm a writer again!
at February 04, 2015