What's Up Wednesday Plus A Huge Favor! 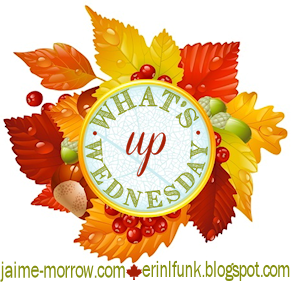 What's up Wednesday is a blog hop created by Jaime Morrow and Erin Funk to help writers keep in touch with each other. If you'd like to participate, sign up on the linky at one of their blogs, and use one of the cute WUW buttons provided. Thanks!
WHAT I'M WRITING

Blurbs! For our new book, which will be out on January 6. This is not the official blurb...but it's my favorite version so far.

Magic gave us so much more than we expected. We found a purpose, we found a destiny, and we found each other.

But California isn’t the new start we were promised. Dr. Child may be gone, but now we must face a military school, dangerous secrets, and a prophecy that has half the country wanting us dead. When the line between enemies and allies blurs, Sam, Juliette, Ana and I need to choose between love and sanity, between magic and survival.

Freedom feels like safety, but it’s not. There are no walls here. No place they won’t be coming for us.

No place we won’t destroy.

This book is the sequel to Alchemy, and it will be released on January 6, 2015. The cover is gorgeous, the title is shiny and so much better (I don't dare tell it to you without the permission of my co-authors. Wake up guys!!!)

Which brings me to this huge favor!

We are starting to put together our marketing plan, and I am in dire need of blogs willing to help with the cover release and the release tour. I'm also desperately in need of people willing to read and post reviews of the book before it releases on January 6.

If this is something you would be interested in, please post a note in the comment section or email me at thecrousefamily @ yahoo . com  (But without the spaces, of course).

There is a raffle for all blog hosts and reviewers, with an amazon gift card as the prize. I'm not sure what it will be worth yet, but I'm thinking either 3 cards for $25 each, or maybe one bigger card....

WHAT WORKS FOR ME
Sabrina (one of my coauthors) was working on edits last night, and we had the following conversation (via facebook)

Sabrina: Gah! I'm working on...and I'm wondering if it's going to suddenly seem shallow. I mean the chapter goes "Death, death, death, boo hoo you were mean to me once"....but it's hugely important to Juliette's development.

Other suggestions that didn't work for various reasons and then...

Melanie: My only suggestion is that Juliette mentions how dumb it is to fight about the past when people just died...that's one take home lesson from writing this book--it seems like if I'm bothered by something, having Ana mention it on the page sparks really interesting developments.

Now I have no idea if Sabrina is going to take that advice or not, but I started thinking about it, and many of my best scenes were polished by that tiny piece of advice. So I throw it out there, in the hopes that someone else will find it useful too.


WHAT ELSE IS NEW


I took a lovely 4 day break from writing. It couldn't have come at a more inopportune time, but Sheena and Sabrina were very gracious about it. It wasn't until I took the break that I realized how totally I needed one. I didn't miss writing even one smidge, and when I came back everything seemed shiny and new. I'm in it until it's done now, which will hopefully be sometime this week.
at November 19, 2014