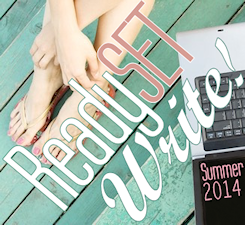 Ready. Set. Write! is a summer blog hop set up by  Jaime Morrow, Alison Miller, Katy Upperman, and Erin Funk. If you want to participate, you can link up at one of their blogs.

1. How I did on last week’s goals:
Well, it depends on how you look at it. One of my coauthors, Sheena, told me I HAD to watch the TV show Twisted on netflix. The actor who plays Danny Desai is who she would pick to play Sam Ryan if our books were movies.

In a funny twist, the actor who plays Jo Masterson could easily be Ana:

Anyway, watching the show has given me SO many ideas! (That's kind of odd, because the storylines aren't remotely similar. But seeing Sam's beautiful hair up on the screen like that.... Anyway, since Goal #1 was to flesh out my ideas for the next book, this can be construed as working, right???

No? Darn. I knew it would be a tough sell.

One of our amazing beta readers also finished critiquing our manuscript, so I've been reviewing that. Not a super productive week, all in all.


3. A favorite line from my story OR one word/phrase that sums up what I wrote/revised

I don't know that this is an all-time favorite line. but it is my favorite line on the page my manuscript happens to be opened to:


His eyes lost some of their laziness. "Most people avoid Valentine's Day dances right after a bad breakup," he said, leaning toward me so he didn't have to shout.


I laughed out loud at how far off base he was.  "I'm not most people."


4. The biggest challenge I faced this week (ex. finding time to write, the siren song of SNIs)

The projects I feel like I ought to be working on require other people (for one I need my coauthors, who are off doing summer things, and for the other I need the betas) and this week I realized that starting another project would be a very bad idea at this point in my life. I'm really glad I made that decision, but it still leaves me trying to convince everyone that watching TV is writing. Blurg.


5. Something I love about my WIP

It's pretty funny how Twisted has so many characters that are similar to characters in our story. Overprotected Jo could almost be Ana, sexy Danny could kind of be Sam, Rico could definitely be Seb. But Lacey IS NOT Juliette. Not even a little bit, and I'm so glad. When Sabrina created Juliette, I didn't think I would like her, since her defining characteristic is grumpiness. But I love her, and I love Sam, who is also a character I would never have created. It's awesome.
at June 30, 2014