I've figured out that I don't much like waiting the whole month to tell you about the books I've read. I think in June I'm going to try writing it every two weeks instead. Still, this was a great month for reading! I read a lot of books I think both boys and girls would enjoy, which is always a plus for me. I hope you enjoy them!

A note about my rating system.
1=I couldn't finish it. Blech.
2=I finished it, but I wish I hadn't wasted my time.
3=I finished it, and I don't regret it, but I probably won't search out anything else by this author.
4=I loved it!
5= It is nearly impossible to get a 5. To get a 5 would almost always mean that it has taken its place among my favorites. Occasionally, to get a 5 might mean that it ought to take its place among my favorites, if only I had slightly better taste.

The Emperor of Nihon-Ja
by: John Flanagan
438 pages
published in 2010
4.5/5 stars
This is a Book For Boys!
This is book 10 in The Ranger's Apprentice series, which starts with The Ruins of Gorlan.
This is a great series for all YA teens, especially boys. I have no idea if the sword fighting is true to life, but I'd be surprised if it was not, it's so well thought out. I love the intelligent, interesting characters and their interactions, but it's really the action that makes these books exciting.

It took a book or two before I got used to the omniscient point of view. John Flanagan is from Australia, and writers from outside the US are not nearly as locked into the limited third as we are. I'm not sure whether the author's writing has actually improved, or if  I've simply gotten used to it.
The books are about a boy named Will who becomes apprenticed to the ranger named Halt in a magical world based on European medieval history.  The rangers are a select group of men who serve as the intelligence force and police for King Duncan. They are masters of camouflage and certain kinds of fighting, especially the saxe knife and the long bow. These stories are Will's adventures. In each book he is older and travels somewhere new. In this particular book, he is in Nihon-Ja, a country that reminds me of medieval Japan, though the fit is not perfect.  I highly recommend the series, but I think you need to start at book one.
(I read this for the Once Upon A Time Challenge)

A Tale Dark and Grim
by: Adam Gidwitz
192 pages
published in 2010
There is some confusion in my mind about who this is for. It's definitely for middle grades and up, but it's recommended as a read aloud for ages 6 and up. More on that in a moment.
4 stars


My oldest daughter started reading this to my younger children before I read the book. They were all completely entranced. I kept hearing little pieces of the story, and I would say, "Are you sure this is appropriate to read to little kids?" She would assure me that it was. Plus, every place I could find on-line said it was a great read for school age children. So I let it go.

And it was probably completely fine. This book is "“...well... awesome. But in a horrible, bloody kind of way." As if poor Hansel and Gretal didn't have it bad enough, Gidwitz has taken their story and added some of the more obscure and horrifying Grimm fairy tales and tied them into one gruesome tale.

In a world where most of the original tales have been softened and most of the uglier parts have been taken out, Gidwitz has "bloodied them back up." But his narrator has such a snarky sense of humor that it comes across as funny. Every gory scene has a warning in front of it, like this example: "Are there any small children in the room now?” he asks midway through the first tale, “If so, it would be best if we just...hurried them off to bed. Because this is where things start to get, well...awesome.” In addition, adding the horrific pieces back brings the meaning of the fairy tales back, and the narrator makes sure we get it.

So, as I read it, there were times when my eyes got big, and I turned to my daughter and said, "You REALLY read this part out loud?" But mostly I think it was great. All my kids, even my six year old, have picked that book up to read parts of it again.

The Magic Thief (Books 2 and 3)
by: Sarah Prineas
416 pages and 384 pages respectively
Lost: published in 2010
Found: published in 2011
For middle grades, though I think YA readers would like them too!
These are Books for Boys!
4 stars
In April I reviewed the first book in this series. I had listened to it as a book on tape and I said that although I enjoyed it, I thought it went a little slow. I read the sequels instead of listening to them, and it completely solved the problem. These are such fun books! I finished them both in less than a day, and when I was done I wished I'd read them to my younger kids.
This is the story of Connwaer after his locus magicalicus is destroyed. Without it, he can't communicate with the magic, and the magic desperately needs him. I especially enjoyed book 3. The magical world in these stories is so complex for a middle grade book. I love it when an author doesn't dumb things down for kids. I'm especially fascinated with Connwaer's relationship with Kerrn--the captain of the guard, who obviously respects Conn, yet doesn't flinch to have him arrested if that is her duty. 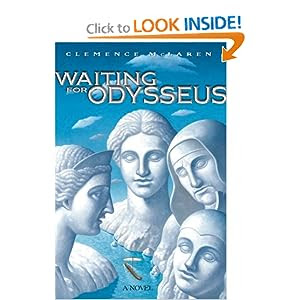 (I read this for the Once Upon A Time Challenge)
Waiting For Odysseus
by: Clemence McLaren
published in 2000
160 pages
Young Adult
2 stars
This is the story of the women who loved and waited for Odysseus--his nurse maid, Penelope, Circe, the king's daughter (whose name escapes me at the moment) and Athena. I love books with strong female protaganists, and I was excited to read more about the stories of these women. But this was not the story of these women. This is the story of them waiting around until they hear a story about Odysseus. It was just his story of them hearing stories about Odysseus, meeting him, falling in love with him and then pining away after he was gone. And you know, there was a lot of sex in the Odyssey, which is remarkably more obvious when being told from the point of view of the women he had sex with. Blech.

Pirates
by Celia Rees
374 pages
published in 2003
Young Adult (Mature)
4 stars!
Nancy Kington is a wealthy merchant's daughter living in Bristol, England in the early 1700s. She has promised to marry her childhood sweetheart, William. When her father dies, she is sent to live on her plantation in Jamaica, where she meets Minerva Sharpe, a black slave. Their lives entwine as they live through an attempted rape, an arranged marriage and a brutal murder. Together they escape to the high seas, where they live as pirates.
This book was exciting and well researched. I love stories set on ships, and found this to be a rollicking adventure. It's more mature in theme than a book like The True Confessions of Charlotte Doyle

, and yet it has that same strong willed female protaganist that I love so much. The one thing I didn't like was that the overarching plot sometimes took a backseat to the action.

Death Cloud: Sherlock Holmes, The Legend Begins
by: Andrew Lane
306 pages
published in 2010
Young Adult
This is a Book for Boys!
4 stars
When Sherlock Holmes is fourteen, he spends the summer with his eccentric aunt and uncle, and spends his days wandering the English countryside with an orphan named Mattie. When two local people die with symptoms resembling the plague, Sherlock Holmes begins his investigative career. This is the first book about a teenage Sherlock Holmes to be endorsed by Conan Doyle's estate. It's attention to detail is remarkable. I love thinking about how Holmes became the man he was.
I enjoyed this book every bit as much as I enjoy a good Sherlock Holmes story--which is to say, it's an occasional pleasure for me. The story was far fetched, as Sherlock Holmes stories often are, but the character development was well thought out and fun.