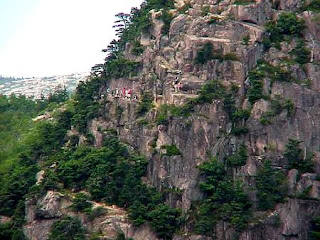 My first trip to Acadia National Park was on my honeymoon. I'd never been to the East Coast before, and the rocky shores of the Atlantic Ocean riveted my imagination. I could have spent hours meandering around Pebble Beach or Thunder Hole, but Roger was looking for something a little more exciting--maybe The Beehive, or possibly even The Precipice.

At this point, I should mention that I LOVE peregrine falcons. I'm absolutely devoted to them, and if I had a million dollars I would donate money to their cause. I love them because they were nesting near the hike called The Precipice, and so it was closed to all hikers that day. Otherwise, I probably would not even be here writing this blog, because The Beehive nearly killed me, and apparently the Precipice is even more precipice-y. The picture at the top of this blog post is one small section of the Beehive. It's not a long hike--only 1.5 miles, but it feels like it's straight up. Metal rungs are dug right into the side of the cliff. I learned a lot about myself as I followed my husband up the cliff. Mostly about how I'm terrified of ledges, which I didn't really know before, but which has since become an important part of my life. Tears poured down my cheeks the whole way up the Beehive. Roger kept asking if I wanted to go back down, but I refused. I kept muttering to myself, "My mom may have raised a crier, but my dad didn't raise a quitter. My mom may have raised a crier, but my dad didn't raise a quitter." Somehow, I made it to the top without a stray gust of wind knocking me to my death on the rocky crags below. The views of Sand Beach and the Atlantic Ocean were spectacular, and we took the longer hike down the backside of the mountain.

Acadia National Park seems much more accessible than the National Parks I grew up with. You can pick wild blueberries as you hike, and people stop to chat with you wherever you go. Even after spending a summer in Bryce Canyon, I didn't feel at home there. The landscape is too stark and surreal to make it my own. But Acadia was instantly home-like. The trees, the ocean, the mountains, the flowers--it's all stuff you see out in the world, just more so. 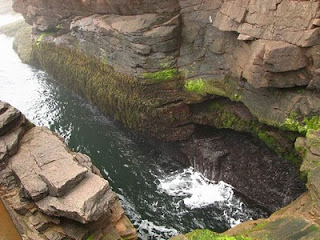 Last summer we went to Acadia with my dad, my grandmother and 2 of my Utah nieces. My 5 year old son, J, wanted to stay at Thunder Hole all day. The waves crash in and out here--with spray as high as 40 feet when the conditions are just right. It was gentle the day we were there, and mesmerizing to watch the water level rise and fall. The next week, someone was swept off to sea and killed standing in the very spot J and I had stood for so long.

One of the more challenging things on my list is to travel all of the carriage roads in Acadia National Park--47 miles worth of trail. I've been to Acadia National Park at least 10 times since my honeymoon, but I have yet to do more than stare longingly down the carriage trails. There are always so many other things to do (like standing at Thunder Hole for hours) and somehow we've never made the time. That's about to change. Tomorrow I'll tell you about these amazing roads and my plan for traveling all of them in the next 16 months.
at June 16, 2010

Email ThisBlogThis!Share to TwitterShare to FacebookShare to Pinterest
Labels: Acadia